Learn more about Minecraft servers with a PvP arena, where you battle other players in a free-for-all environment. Improve your combat skills and reign victorious in a multiplayer environment. See tips & tricks to play.

PvP arenas come in many forms and can be found on all types of games, including adventure games like prison servers. The popular version of this arena game that is found on many games is a free-for-all. You can equip your best weapons and head into the arena solo or as a team. There are often minigames that take place in the arena like king of the hill, where you control a small area for rewards. There are no teaming rules or weapons limits in these types of arenas.

The other type of PvP arena is more of a Kit PvP experience. You choose from a selection of classes at the entrance and then spawn inside the arena. You often collect points or money for defeating other players. Kill streaks, powerups and more can make the game much more competitive than a free-for-all experience.

Minecraft Servers To Get Better At PvP

Both types of PvP arena servers are very popular and they are usually found inside of other game modes like skyblock or prison. Some of the most popular Minecraft games have PvP arenas:

Choose from a variety of popular Minecraft servers to play on. Whichever you prefer, it will more than likely contain a PvP arena to battle inside of. If you want to get started on one of the top-rated servers, follow these steps: Minecraft > Multiplayer > Direct Connect: skyblock.archonhq.net.

When referring to Minecraft PvP, there are two types of combat. Up to Minecraft 1.8, which is found on most Minecraft servers even today, is click-based. The player who lands the most hits on the opponent is likely to win the battle.

The Minecraft 1.9 update brought a new type of combat, which relies much more heavily on timing your hits. It introduced new elements like sweeping edge, shields and more. While this new version of combat is not nearly as popular, it does take a lot more skill.

PvP arenas are enclosed arenas found within in a Minecraft server network. They are fairly straightforward for the most part, but they also may contain features such as jumppads. When you stand on, you will be shot across the map in that direction. This is great if you are trying to escape an opponent. There are all kinds of themes that you will find, ranging from jurassic to underwater. 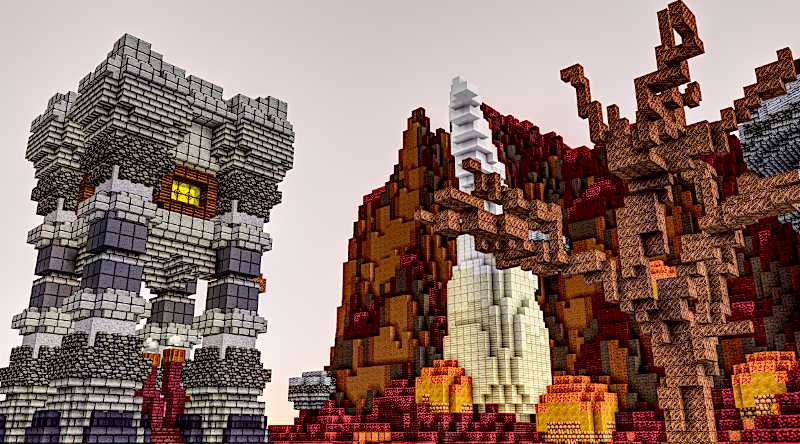 Plunder enemy bases on the Minecraft raiding servers and become the strongest faction in the game. Learn more about raids in this guide and get started.

Greetings everyone, we are excited to introduce the latest Mini Map!Realm InformationThe Onyx Mini Map will release on Sunday August 21st @ 3:00 PM EDT / 6:00 AM AEST / 8:00 PM